Spectacular Water Shows at The Bellagio

From 1980 to 2012 we were part of the computer industry and would travel two or three times a year to Las Vegas to attend Comdex, Computer Electronics Show and other expos. When I was off the clock I’d often explore nearby Death Valley, Red Rock Canyon or Zion. Otherwise I would walk the Strip to visit the city’s many casinos.

There has always been intensive competition among the casinos vying to outdo each other to draw more gamblers and guests to their respective venues. I recall when the Mirage opened in 1990 it featured a huge, colored fire-breathing volcano to draw attention to its new facility. Not to be outdone, in 1998 when the Bellagio opened a few block away it showcased a huge gorgeous lake on which lighted water fountains danced to music to wave potential guests into its spacious casino.

Turn up your sound! I’ve recorded three of these exciting, picturesque fountain performances below for you to enjoy.

Please note that each geyser is on a separate page in order to minimize web page delay.

The Bellagio is a great place to visit when you’re in Las Vegas.

A New Take on Cloud Computing

I never expected that cloud computing would evolve to this.

Below is a form of “video in the cloud” from Cisco. The data is hovering over the Convention Center at the Consumer Electronics Show in Las Vegas today. 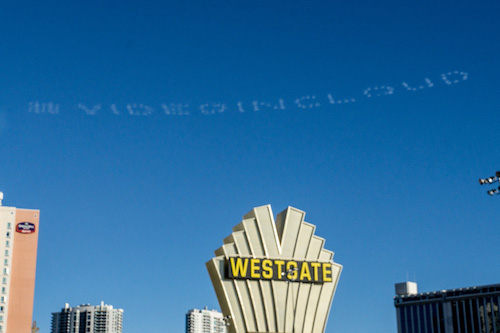 I think this works only when the sky is clear!

🙂 I heard no announcement as to availability. 🙂

Making My Way to CES

I’m always excited to go to CES and see the new devices from hundreds of manufacturers – devices that are waiting to dazzle us. For the past 30+ years I’ve been attending this whiz-bang exhibition.

But this year it is very interesting getting to Las Vegas. Beginning on New Year’s Day the weather services warns us of heavy snow and frigid temperatures for the next week. Two days before my scheduled travel date, I receive a notice from United Airlines that my Monday flight is cancelled and that I should call to reschedule.

I spend six hours on hold to United’s reservations center and when I finally get through to an agent I make an alternative reservation for later in the day on Monday.

An hour later, I receive another United notice that this flight too is cancelled. Back on the phone, this time for more than four hours, and they reschedule my flight to Wednesday evening. This flight is not going to work since I would miss two full days of CES.

As I view the airport gate assignments I see most of the other flights from Grand Rapids are cancelled. Most likely they fly to Detroit, Cleveland and Chicago – cities where the airports are shut down.

The incoming flight from Las Vegas is 30 minutes late. But despite the drastic weather my flight to Las Vegas departs an hour late. Here’s a vote for air service city-to-city rather than the hub and spoke service used by most airlines.

A short three and a half hours later, I’m in the desert without any snow and enjoying the 60 degree temperature. I am lucky to get out of the big freeze.

Today I hear that the temperature in Grand Rapids is -10.

I had to use my sunglasses in Las Vegas.